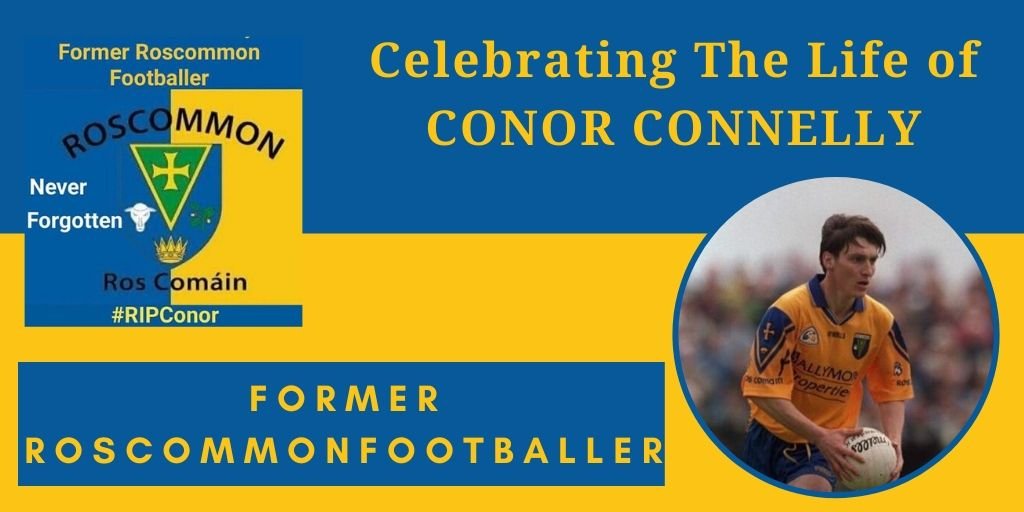 Tribute to Conor Connelly Roscommon footballer: Conor was reared in Creggs, a small village on the Roscommon Galway border with his parents Jimmy and Nora, brothers Darragh, James and Robert as well as his sister Sharon

He became interested in sport from an early age and his skills were developed in Creggs National School and Creggs GAA Club. He also played Rugby for Creggs Rugby Club. Conor would have reached his peak and excelled in whatever sport he chose. He played all his underage football for Creggs GAA. He played underage hurling for Oran GAA Club.

How I got to know Conor

After I finished in the Abbey National School in Roscommon, I went to Roscommon CBS. I was in 1st year with Conor’s brother Darragh and I met him through Darragh. We had a class Gaelic football league and I saw from the start Darragh was a talented player with great things to come from him. I saw Conor play in matches in hurling and football for Roscommon CBS. I and Darragh were on the Roscommon CBS 1st year hurling team together. Then I saw Conor playing for the CBS in a few Connacht colleges football and hurling matches. He was a very talented player a great engine could run all day, a natural athlete. He was a defender’s worst nightmare to mark. As we went through the grades we played on the same teams because I was a goalkeeper and a forward (not at the same time) I never had to mark him. That said he was all over the place tough in the tackle and if there was a 50/50 ball he would go for it full throttle and once he got the ball it was impossible to get the ball off him. Not only that but he had a great peripheral vision to spot a player in a better position for a score. He also had a great day for a score. 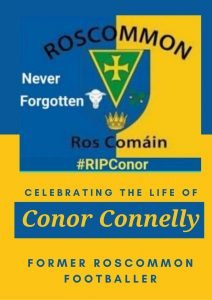 With the Conor’s rapid progress as a footballer, it was inevitable that it wouldn’t be long before the county kept calling and that is where his footballing career really took off. With the Roscommon County, u16 manager knocked on his door. He was progressing quickly with great performances at the club, colleges and now county. Next up was promotion to the Roscommon County Minors. His finest performances were in the 1992 Minor football championship he played an integral part in Roscommon winning the Connacht Minor Football title. Next up a trip to Croke Park for the All Ireland Minor Football semi-final v a talented Armagh team Oisin McConville, Diarmad Marsden and Des Macken.  Conor started on the bench as Rossa O’Callaghan returned from injury and Rossa Started the game. Roscommon held their own early in the 1st half then Armagh lifted their performance enter Roscommons tour Dr force, Conor Connelly and he made an immediate impact scoring 1 fantastic point. He then attended St Mel’s College where he had success on the field as well as academically. He went on to play u21 for Roscommon before moving to the Roscommon senior football team where he stood out having a fantastic performance in 2001 where he played an integral part in Roscommon winning the Connacht title in 2001. He went on to study Law in UCD and while there played Sigerson Cup Football for UCD. Romance blossomed while in UCD where he also met his future wife Claire.

Conor won a junior title with his home club. Family circumstances meant a move to Ballinlough and this meant a transfer to Michael Glaveys GAA club where he fitted in very quickly. And turned in great performances in his time with the club. His professional career as a solicitor took him to Dublin where he served his apprenticeship to become a solicitor and he transferred to St Jude’s GAA Club where he made a huge impact on and off the field of the field. Before for a summer or two he went stateside for a summer or two work.  He played for Shannon Blues GAA Club in Boston and while there won a Senior title. His Brother Darragh played for the club for a few years whilst living in Boston.  As previously mentioned, he joined St Judes GAA CLUB where he made a huge impact on the club during his time at the club. Conor married Clair and the had 3 Children, Rossa, Eoghan and Caragh. He left the bright lights of Dublin to Ballycumber and played for Ballycumber GAA Club where he., Again made a huge difference and got hugely involved in the community. He was trusted and loved in Ballycumber and in 2016 he managed to  Ballycumber GAA Club to glory. And in celebration singer-songwriter Simon Casey penned a song called Connellys winning matches. Saturday morning he went for a jog and never came back. When out he passed away.

I am one of many to have been privileged to have known Conor in person and as a player and teammate. We were teammates in Roscommon CBS and played against each other at club level but always friends. Off the pitch. Connor Connelly was a gentleman and a supreme athlete as a player but. Above all a great friend to all who knew him. He will be missed by everyone whose lives he has touched. Gone but not forgotten Rest in peace Conor, your place in heaven is assured. #ripconor 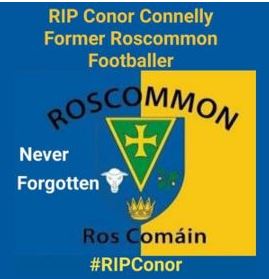