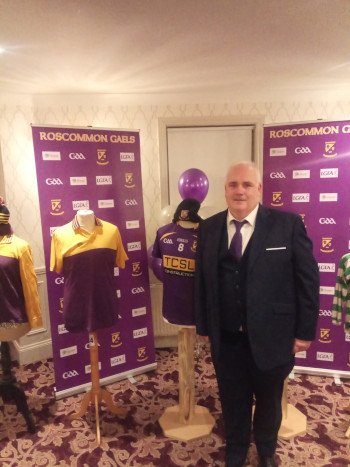 The club facilitates Gaelic Football from u8s up to and including senior, Hurling from u8s up to and including senior, Camogie say all levels from u8s up to junior.
The junior team won the county title this season and as a result, will compete at Senior Level next season, Ladies Gaelic football at all grades from u8s up to and including adult levels.
We can’t leave out the very active Scór teams also at all levels and a new initiative the club started this year called Roscommon Gaels All-Stars which is an academy for kids and kids with special needs.
Managers and coaches do great work at all levels of all the aforementioned codes and the Roscommon Gaels All-Stars received an award for this initiative.
For my involvement in Roscommon Gaels GAA Club, we have to go back to 1990. I made the Abbey National School hurling  panel it started with a class league in the school then I got on the school hurling panel as I said. We had a very talented panel of hurlers. So good, we got to the county final in Athleague on a wet Friday night. We played a very good Fuerty National School. Unfortunately, we weren’t good enough and Fuerty National School won the Roscommon National Schools Hurling County Final.
My first season involved in GAA ended in disappointment with a defeat that day. But despite that, I learned a valuable lesson in both sport and life in the sense in sport or life things don’t always go the way you want to.
The next step in my playing career came when I started in Roscommon CBS in Roscommon town.
Every week there were 2 opportunities for sport 1 was PE, the other being Games. PE was once a week and lasted for a period of 1 class every week. During PE we had indoor soccer. In indoor soccer I loved being a goalkeeper the person so inspired me to become a goalkeeper was Republic of Ireland goalkeeper Packie Bonnar. He was a class goalkeeper who played for Celtic at club level and was a goalkeeping legend I wanted to be like him. For me he really came to the fore as my inspiration when he played for Rep of Ireland in the World Cup Italia 90. Brilliant saves throughout the world cup. Unlucky to concede a goal in the 1v1 draw v England, a clean sheet v Egypt and conceded a goal v Holland in the last group game meant we made it out of the group  next up Romania 0v0 at full time, 0v0 after extra time and so to penalties Packie saved a penalty and David O’Leary scored the penalty to send Ireland to the World Cup Quarter Final s for the first time in our history. Everyone had high hopes. Next up Italy, formidable opponents with 1 world-class player to schillaci. Unfortunately, a disappointing result 1v0 to Italy .
But I was inspired by Packie Bonnar and that is when I knew I wanted to be a goalkeeper. A decision that stood to me throughout my playing career. 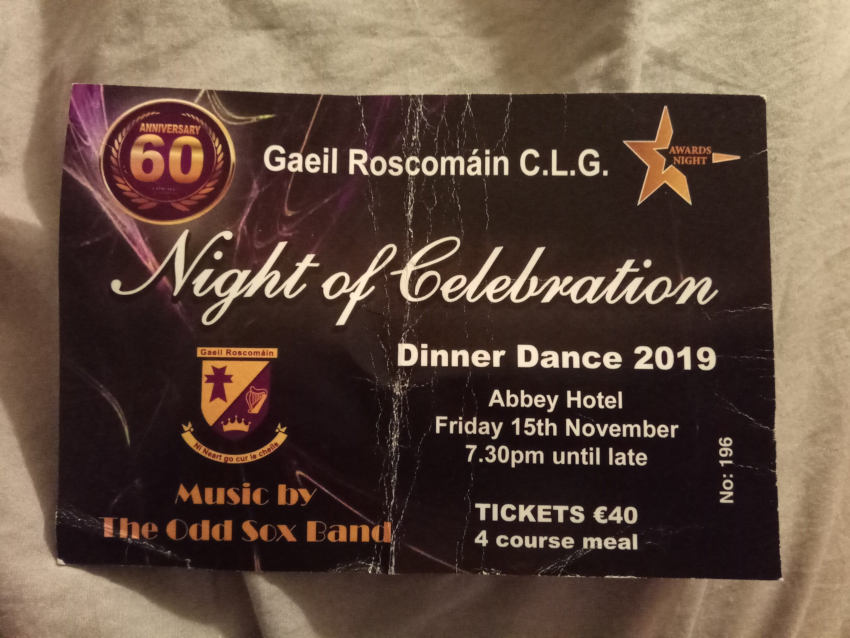 Then there was Games time. This consisted of 2 class periods and took.  Place at the CBS pitch on the Galway Road and consisted of Gaelic Football. The teacher asked what position I wanted to play I said, Goalkeeper. For the first few weeks was a case where 2 teams 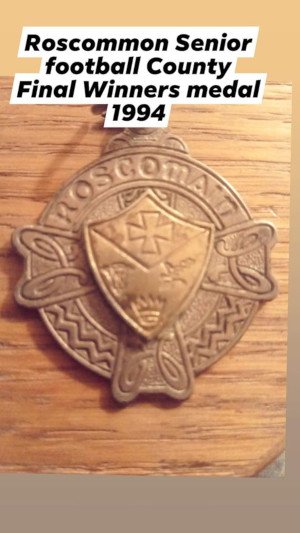 were picked for 2 games. I was the goalkeeper on 1 of the teams and I was lucky whatever team I was on we won. A good confidence builder for a rookie goalkeeper. After a few weeks a class league was set up that was on every week for the school year. I loved playing all those games in the class league in the first year.

However, hurling was my 1st choice. I wasn’t involved with the CBS 1st Year Football Team, I wanted to concentrate on the Hurling team with the CBS 1st year Hurlers. I was a goalkeeper for the team. While playing hurling for the College my development as a goalkeeper went from strength to strength. So much so, that my maths teacher Pat Rogers, who was involved with Roscommon Gaels GAA Club asked if I would be interested in playing for the u16 football panel.

I said yes and joined the panel. This was my first year involved with Roscommon Gaels GAA Club. It was the start of a playing career where, as a player, I would meet and make friends with great people and success on the field. Little did I know how successful it would be and how soon my 2nd medal would come (the first was the the National Schools hurling Runners up medal) in 1991 we made it to the final beating St Dominic’s in the final in May. My first winners medal.
My next medal wasn’t long coming when I joined the u16 Hurlers we both to the u16 hurling county final where we played St Dominic’s in the U16 Hurling County Final. The Game game ended level so went to a replay. We won the replay by 6 points. 2 winners medals in my 1st season was great. The next season I was on the CBS juvenile and junior hurling panels and at club level was on the u16 football and hurling panels with Roscommon Gaels. We won the u16 football final beating Castlerea St Kevins. I was called up to the club minors as well. In u16 hurling we lost to a Francie Grehan inspired Four Roads team. Francie was a gifted hurler and played well that day winning man of the match. But with the minor footballers, things were going well. We made it to the Minor County Football Final which we won, beating St Dominic’s by a point. We played most of that match with 14 players.
The next season I was on the Minor Football Panel, Minor Hurling Panel, Junior Hurling Panel and U21 football panels. Got winners medals with the  Minor Footballers, Junior Hurlers, and U21 Footballers, I went on to win 2 more Minor Football medals, winners and runners up medals with the U21 Footballers,
I won a 2nd Junior Hurling winners medal as well as an O’Rourke Cup (League) and Senior Football County Final winner’s medal. And a few trophies. I also played senior and U21 hurling but didn’t win anything. I played for the Roscommon CBS Senior Footballers in 1994.  I went on to play senior Football for Athlone senior Footballers where we reached the Leinster Senior Club Football Quarter Final where we were beaten by Portlaoise,
I played Junior Hurling and Football for Kilmacud Crokes and played Junior County Football in England for Gloucestershire where I won a Junior All Britain football medal we went on to play Dublin in the All Ireland Junior Football Semi-Final we lost that day but it was amazing to be involved in an All Ireland Semi-Final v a quality team like Dublin.
In my playing career, I have many achievements but whoever I played for or what I achieved, it all started with my home club Roscommon Gaels 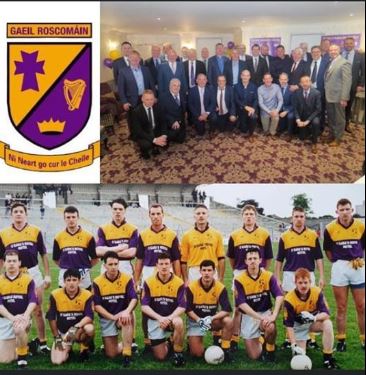 And so back to the Roscommon Gaels 60th Anniversary Celebrations Night on the 15th November,
It was a great celebration of the Clubs achievements over the 60 years. The work coaches, players, sponsors, investors, parents, schools etc from u8s up to senior over the years must be thanked and acknowledged and as a result of all that made it the club, it is today.
The night went well. Seamus Duke was the MC for the night. On the night I was on the Roscommon Gaels Senior Football Panel that won the Roscommon Senior County Football Title in 1994. We were honoured on the night.
A massive well don’t to the organising committee on organising what was a great night. The night started with the schedule was between each course would be a history of each sport in the club. Before the starter, there was the history of Hurling in the club and past players. With the starter consumed, it was onto the history of Gaelic Football and again players from the passed were interviewed. Main Course consumed next it was the history of Camogie in the club. Dessert is eaten and it was time for the history of Ladies Football in the club. And last but not least the Scór ection of the club was mentioned.
The meal out of the way it was time for the presentation of the Awards. After that, we, the Senior Football Panel who won the County Final in 1994 was introduced to everyone on the night. It was great to meet the lads again after we were introduced we had a group photo with of the senior football team from 1994. It was great to meet everyone in the club under 1 roof in 1 night and chat about memories from out playing days and I have to give a special mention to the Roscommon Gaels Junior Camogie team that won this year’s Junior County title beating Four Roads who now go on to play senior next season. They were presented with their winner’s medals.
Well done to them and everyone who received awards and medals on the night.
Now it is onto the future of the club.
Also well done to former players who give something back to the club by coaching underage teams in all codes in the club and so inspire future generations to fulfil their dreams and meet great people and make life long friends and learn from sport and achieve things and who knows one day represent Roscommon at the county level
The Gaels have a website…here